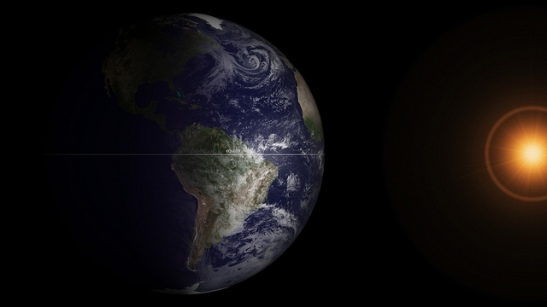 Image courtesy of NASA Goddard Photo and Video on Flickr

Leap years. We all know about them. We learned all about them in school; It takes the Earth just a little over 365 days to travel around the sun. We’re taught it’s 365 and a quarter days each year. That quarter is about 6 hours. So every four years (6 * 4 = 24 hours) we add an extra day. That extra day is added to the end of February to give us February 29th once every four years. We know when it’s a leap year because if we can divide the year by 4 and end up with a whole number, it’s a leap year. 2016 (the next leap year) divided by 4 = 504. Simple maths. Or at least that’s what I have believed for the last 25 years. Turns out, that’s not entirely accurate.

It does take the Earth a little over 365 days to orbit the sun, but it’s not 365 ¼ days exactly. It’s actually 365 days, 5 hours 49 minutes and 16 seconds. That’s 10 minutes and 44 second under 6 hours. Adding an extra day every four years, means we are actually adding a bit extra each time, which over the course of thousands of years would eventually throw our seasons out of sync. So, there’s an additional rule we need to know about leap years. If the year is divisible by 4 we add a leap year, unless it is the start of a new century i.e. a year divisible by 100. For example 1900 / 4 = 475 (a whole number), but because 1900 is the start of a new century, it’s NOT a leap year.

So because the number of rotations the Earth does in the time it takes it to travel once around the sun don’t match up exactly, we need to have these little corrections. You’d have thought that was enough, and it generally is. However, all these corrections are not quite perfect, and it means that in around 1000 years, there’s still going to need to be another correction, but our scientists today are happy to leave it up to the people of the future to sort out.

So there you go. Something that I thought was so simple growing up, turns out to be somewhat more complicated. And that is what I learned today.

This entry was posted on January 27, 2015 by David Harbinson in Science and tagged leap day, leap year.