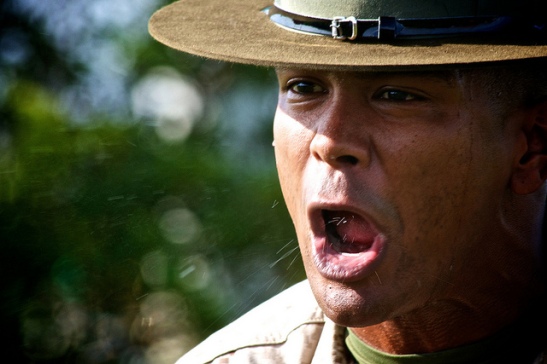 During one of my one-to-one classes today, with a low level student, we were practicing telling time. The student told me at the beginning of the class that he currently doesn’t have a job, but that he will be going to the navy at the end of the year for his mandatory military service. He explained that part of the reason he was studying English was so that he would be able to communicate with American sailors and marines during his military service.

As we got on to the subject of time, he had quite a lot of questions. One thing he really wanted to know was about military time. He already knew that the 24-hour clock format was used, but wanted to know how to speak the time. We took a bit of a diversion in our lesson so that I could help him out, and I explained that we normally speak the time as we see it, i.e. 14:30 is “fourteen-thirty”. I explained that if the time begins with a 0, as in 07:30, we say “zero seven thirty”, and when the time ends in 00, e.g. 12:00, we say “twelve hundred hours”. That’s about as much as I knew, and I realised that I’m probably making some mistakes. So, when I got home I began to do some research.

In today’s post, I’ve focussed mainly on pronouncing and writing the words, and not really how to convert from civilian time to military time (although there are plenty of guides and tables online to help you do that). Here’s what I found:

The first thing that I found out, and now that I see it, it looks familiar, is that when writing military time, the colon is removed. So 07:00 is written as 0700. That helps to explain why we would say zero seven hundred hours!

When pronouncing the time, it depends whether there are just hours, or whether you also want to include the minutes. To say a time such as 1400, you just say “fourteen hundred hours”. For a morning time, that starts with 0, such as 0700, you say “zero seven hundred hours”. When you want to add the minutes as well, you split the time into two sets of tens. So 1433 is “fourteen thirty three hours”.

The “hours” is often optional, especially in face-to-face communication, although this page suggests that Soldiers and Airmen are more likely to use “hours”, while Marines and Coast Guardsmen will tend to omit it.

Both zero and oh can be used to say the first 0 at the front of the time, although oh is more casual, and using zero is usually the correct military protocol.

In military time, when it gets to midnight, you can say 2400 (twenty four hundred hours) or 0000 (zero hundred hours). Although this one is contested online. Wikihow says that only 0000 is used, but this video by Howcast, which features a sergeant in the US Army, says both can be used.

One thing I had never seen/heard of before is adding a ‘Z’ after the time, for example 1300Z. The ‘Z is pronounced Zulu, which follows the International Radiotelephony Spelling Alphabet (aka the NATO phonetic alphabet). So 1300 is pronounced “thirteen hundred Zulu”. The Zulu refers to the UTC 0:00 time zone, also known as GMT (Grenwich Mean Time—especially by us Brits). We all know that the world is split into different time zones, and each time zone actually has an assigned letter. The east coast of the US for example is in time zone R (or Romeo time zone). While it’s 1200Z in London, it’s 0700R is New York.

Note: A lot of what I came across today comes from American sources, and is correct for the American military. The militaries in other countries might be different.

This entry was posted on February 23, 2015 by David Harbinson in Language and tagged army, marines, military, military time, navy, time.